Save your vegetables, fruits scraps & skins I'll show you how to make a healthy homemade vegetable broth. This easy and flavorful vegetable broth recipe will enhance the flavor of your meals. It's cheaper and takes only 1 hr to make it!

I promised you when sharing with you the perfect brown rice risotto recipe that I'll give you a vegetable broth recipe. In the vegan chunky potato leek soup recipe, I asked you to save your leek green leaves together with their base.

Now, these scraps are going to find a useful end that will blow your mind. I hope from here on you'll be making this vegetable broth recipe using scraps.

This vegetable broth recipe is as easy as boiling something to cook, no technical skills are needed here, my dear friend.

The first time I heard of a broth some years back, it was in a cooking course.

The presenter shocked me when she said: "there no respectful chef who doesn't make a broth, it's the fundamental of every cuisine".

I was like, "what? so you mean all these years we'ven't been cooking the right way?" I never saw anyone make broth in my childhood.

So, back to this vegetable broth recipe.

Broth can be made with either animal bones with veggies or just vegetables.

Before, I used to make bone broth. Now that I follow an anti-inflammatory diet, I can't make it anymore.

It consists of boiling vegetables or bones in a large amount of water for about an hour or so. We drain the liquid that's nutritious and flavorful and discard the rest.

I'll be honest with you, I didn't know there was any difference between broth and stock before researching for this blog post.

From what I've learned; Stock in thick in texture and is made with the purpose to be used to make sauces or/and gravies.

If made with bones, the stock is cooked up to 10 hours and is almost exclusively used in meat recipes.

The broth, on the other hand, is simply made with bones alone, bones & vegetables or vegetables alone. It takes less time to make than a stock.

Broth can be sipped on its own as soup, though it's mostly used to enhance flavors in almost everything, like in this sweet potato leek soup recipe.

Vegetable broths contain all phytochemicals, minerals, and antioxidants found in the vegetables, spices, and herbs.

The vegetable broth is used to sooth a sick body by feeding it with minerals. If you or someone close to you falls sick and can't eat solid foods, use a vegetable broth together with vegetable and fruit juice to nourish the body.

How to make a vegetable broth using scraps

If you go for the classic vegetable broth recipe, you'll buy some veggies, chop and trim them well, boil them, drain to get the vegetable broth and throw the cooked veggie.

Forget that for a while! I can't stand throwing food!

Here, in this vegetable broth recipe were are using vegetable scraps and skins, and cores of fruits, things that you can't imagine using like leek's base or apple cores!

Obviously, you're eating a lot of vegetables and fruits, aren't you? Now if you save the peels, the cores, the skins of all those veggies and fruits, you will be able to recycle them by making a homemade vegetable broth.

You just need to keep them clean, let's say pile your week's scarps in a freezer bag and during the weekend you make this vegetable broth recipe.

The good thing, you don't need to chop anything, neither do you need to stand by waiting for the broth to cook, go on with your duties, this vegetable broth recipe will cook all by itself.

In a big saucepan add all the scraps, add salt, some dry herbs like bay leaves if you've any and add cold water up to the same level as the vegetable scarps.

Bring to a boiling point, lower the heat to medium-low and let it boil for an hour or so. See the recipe card.

Let the veggies broth cool down, I leave it like that for hours or the whole night. When you're ready, wash your hands, drain the liquid part, then using your hands squeeze the broth out of the cooked veggies scraps.

Wring them as you'd do with a towel, you'll not only get all the broth but you'll also squeeze out more nutrients and some fiber.

What to do with vegetable broth?

Now that you've made your vegetable broth what do you do with it?

Drink some as soup, add some nutritional yeast, some cold-pressed oil, some pepper, and some tamari sauce (optional).

Add this vegetable broth into your cooking meals, like rice, quinoa or millet, vegetable stir fry, anywhere the broth is called for in your recipes.

How do to store a vegetable broth?

Get mason jars or glass containers, clean them then pour your broth in, don't fill the container to the brim.

Tightly closed, store in your fridge and use it up to a week or so, but I doubt it takes that long lol!

That's it! you now have a vegetable broth recipe using scraps, if you've any questions, please, don't hesitate.

When Googling to find out more about broth I came across two bloggers that had interesting recipes. Minimalist Baker has a vegetable broth recipe with tomato paste.

Wallflower kitchen will explain better why you don't need bone broth if you've been convinced that's the only gut-healing broth.

Do you make homemade vegetable broths? What vegetables do you use? What do you think about this vegetable broth recipe using scraps? let's chat on the comments below, and please do share this recipe.

My love to you, Githu. 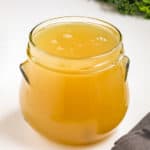 I can't really give you a recipe for this vegetable broth to be honest, it all depends with how much vegetables scraps you have. You can decide to make a lot of broth or just a little depending on how often you eat vegetables and fruits.Just note though, the more scraps, skins, cores etc you'll have the rich and dense your vegetable broth will be.Don't forget to squeeze the cooked scraps to remove extra nutrients.