Hello, my fellow Rheumatoid Arthritis warriors. Today, let's beat RA with this anti-inflammatory tea made with spices including Star Anise. Are you in for a cup of rheumatoid arthritis tea with star anise?

I don't know for you, but gal! the weather here is very cold! And this rheumatoid arthritis tea with star anise falls really like a treat. A kind of hitting two birds with one stone; why do we have to hit on birds ha?
But you got it, this star anise tea will help you deal with rheumatoid arthritis and as well as fight off cold and flu that comes with cold weather.

I hope and I cross fingers that your rheumatoid arthritis is not worsening with the cold!

I hated winter so much, sometimes back because that was when I had very severe flares of RA. And as a matter of fact, my rheumatoid arthritis started when I'd moved from the hot plateau to cold high lands in Kenya at the age of sixteen. You know what they say, the higher you go the colder it becomes!

I wish in those days when I was paralyzed by pain (yes, I have gone through that pain where I really wished to chop off my arm! it always brings me into tears just remembering that period.) someone would have handed me a cup of healing rheumatoid arthritis tea like this with star anise or like this turmeric ginger anti-inflammatory tea

Gal, here now, I am all overwhelmed with emotions, and I really hope you aren't in much pain as I was then.

Did you know that there're two types of Star Anise?

I spiced this rheumatoid arthritis tea with, star anise which is used in most Asian cuisines. It's grown in South China. D mistake it with anise seed that's commonly found in Europe.

With that said, let's see what's making up this rheumatoid arthritis tea!

Besides having a sweet delicate aroma, I love the way it perfumes my dishes and especially tea like this.
Star anise has anethole oil which is said to be effective against bacteria, yeast, and fungal strains.

I bet you enjoyed something made with ginger these past holidays. Am I right?
Ginger is well known for its anti-inflammatory and antioxidants properties. It's used in treating cold, sore throat, coughs, and many other health issues.
There're many studies attesting the benefits of including ginger in your diet when dealing with rheumatoid arthritis.

How often do you spice your dishes with cinnamon? You don't only use in Christmas season or cookies, do you? Personally, I do throw it in almost everything lol.

Cinnamon is known to be antioxidant, anti-inflammatory, antidiabetic, antimicrobial, anticancer, anti… everything. (just kidding). Obviously, It's one of those spices that you must have on your shelf especially when you are a rheumatoid arthritis warrior.

Use it in making tea, it goes very well with ginger and star anise.

There are two types of cinnamon (again? I hear you asking).

The Ceylon. It's the true cinnamon and it grows in Sri Lanka.

The Cassia. The most commonly used in bakery, it's sweet and has a strong aroma. While it's okay to use it as a spice, however, high doses of Cassia unlike for Ceylon can be dangerous for your lungs.

Now it's time for making this tea. Get everything ready and here we go.
Enjoy your rheumatoid arthritis tea with star anise and tell me how you find it.

PS/ personally I don't add any sweetener, but, I recommend you add raw honey. 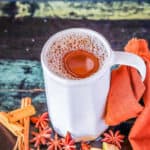