Hi hi, how are you doing? What about sharing together this deliciously sweet plate of easy vegan swiss chard salad with leeks? You might have tasted the bitter taste of swiss chard, and you've ever since avoided them…

Swiss chard is one of the most nutrient-dense vegetables out there, (did you know that they're growing it in the Space?) unfortunately, it's not something you'd appreciate raw and somehow even cooked it still has some bitter taste.

To counteract this, I created this recipe including the leeks. The white part of leeks are much sweeter and quick to cook than the green leaves, that's why I opted them for this quick and easy vegan swiss chard recipe.

Check on this chickpea stew to see how you can use the leeks-green leaves.

I find that leeks give this dish a creamy aspect which makes it very delicious.
Both swiss chard and leeks come with a lot of health benefits, Swiss chard being more privileged by the mother nature.

There are several varieties of swiss chard, the commonly found here in France is the green with white stems.

Swiss chard is a powerhouse of minerals. It's very high in Vitamin K, A, C, E, B1, B2, B3, B6, and Choline.
An excellent minerals source of Magnesium, Manganese, Copper, Iron, and Potassium, among others.

You'll get some good amounts of proteins, dietary fiber, and both Omega 3 and 6 fatty acids.

Belonging to the same family as spinach, beetroot, and quinoa, it's comprehensive then, that swiss chard must hold a lot of health improving properties…

Swiss chards have a high number of phytonutrients that are anti-inflammatory and antioxidants.

Thus, swiss chard has been studied to have anti-cancer properties, it has shown to prevent tumor growth.

It supports your heart, with minerals like Magnesium, Potassium, Copper, Iron, and Calcium, for example, which work together to help in red blood cell formation, blood vessel constriction and help control blood pressure levels.

Swiss chard helps in regulating blood sugar in your body due to the presence of Vitamin B(s) that are helpful in processing sugars and other carbohydrates.

The presence of antioxidants like Lutein and Zeaxanthin will protect your eyes from Eye Macular Degeneration, from glaucoma, night blindness, and cataracts.

High Vitamin K and Calcium makes swiss chard a good source of food that can help you maintain a healthy bone mineral density.

How to cook swiss chard

In this easy vegan swiss chard recipe with leeks, I cooked the chards for about 7 mins, because my daughter of 6yrs was my guest…so they're a bit cooked.

You can add all chopped swiss chard at once in your saucepan.

Nevertheless, avoid too much high heat and boiling as you'll lose a lot of valuable nutrients like Vit. C

If you want crunchy texture, then five minutes are large enough to cook swiss chard, and especially if they are thinly chopped.

How to use swiss chard

They're best with bread, stuff a piece of bread with some of the swiss chard and leeks just as you'd prepare a sandwich.

You can, however, enjoy them with rice, millet, potatoes, buckwheat or make a tart.

I enjoyed mine with some homemade coconut cookie-bread while my kids loved them with millet.

My daughter was surprised to know that she ate swiss chard, because before she always found them bitter…

That's to say how this easy vegan swiss chard recipe with leeks is deliciously good for kids as well.

That's it, you'll enjoy this recipe because it's sweet and has a lot to give you.

My love to you, Githu. 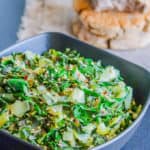 Print Recipe
No ratings yet