I guarantee you that this healing watercress soup with green peas is delicious, soothing, and easy to make.

Watercress soup is such a healthy meal when you want to eat light. Adding some green peas into this watercress soup adds flavor and texture that makes this soup so delicious.

My funny story about watercress soup

One day I was looking for green veggies high in vitamin K. During my research I ed that watercress was used in ancient times as a medicinal herb. It's high in vitamin K and has more than 15 essential minerals and vitamins. I, therefore, promised myself to hunt for this veggie-herb in the future.

It took me long before I came across my watercress. I had even completely forgotten that I had to search for it, at the time of my research, I hadn't that it's not a common veggie.

I, one day, decided to change my marketplace, who knows, things might be greener somewhere else. As I was walking around the new market, I saw this "herb like" green plant folded in a bundle like a little sweet looking bouquet.

How I First Found Watercress

I curiously asked the seller what it was. "Watercress" she answered. I was in a little heaven. I started imagining all the possible ways I could prepare it. After having purchased my first ever watercress, I couldn't help tearing some leaves just to taste.

Well, not that sweet but, with some seasoning, it will be perfect! And I'll eat myself some vitamin K and lots of minerals, I convinced myself.

My first watercress salad was great! I don't know why, but I only ate the leaves that day.

Why is my watercress soup bitter?

Just before serving my kids this my nutritious watercress soup with green peas, I decided to taste it (I was one of those who so confident with their cooking that they don't taste it before serving , I ed a beautiful one lol).

My watercress soup with green peas was terribly BITTER! What! Why? How?

I accused some micro-organisms, who could have possibly contaminated the watercress.

The next market day, I bought my watercress, I also asked the vendor if there was any possible reason why my last watercress was bitter! She assured me that everything was perfect.

With her assuring words, I headed for another trial for watercress soup.

Are you guessing the outcome? You're right! it was BITTER! again?

You might be wondering; why not just google for a recipe? Well, I really love going down headed when creating my recipes. I'm an artist in heart, I like taking risks. And furthermore, I feel more authentic if I could propose you a recipe that I created from scratch!

I almost gave up on watercress till one Autumn day, watercress was back in the market.

Our Watercress soup with green peas

One day, in my now new marketplace, as I was purchasing for some fresh mint, a customer bought two bundles of watercress that was just next to me. "How can he eat this bitter plant?" I asked myself.

I turned to him: Bonjour (hi), how'd you consume your watercress, please?

"Soup? how do you do it? I've cooked mine twice with very mediocre results!" I confessed to him shamefully.

He looked at me with sympathy and amusement combined.

"You need to thoroughly clean the watercress, remove the roots and the stems and that's all" he told me.

"Throw away the stems?" I murmured. If you're a zero-waste person like me, then you'll understand. I don't throw away food. In my opinion, if I could eat the leaves, then why not the stems? Ha!

Still, I was so happy, and thanked him gratefully. He nodded, and with a smile, he left. Now I knew why my watercress soup recipes were bitter. O!

Right there, I bought a new watercress bouquet. I was so excited that now I held the secret behind having a delicious watercress soup!

How to Prepare Healing Watercress Soup That is Not Bitter

I had some coconut cream in the house that day. And I tell you, my oh my, our watercress soup with green peas and coconut cream was so so .

My kids asked for a second serving, my daughter was asking me to prepare the same soup the following day. Since then, we've been enjoying our watercress soup with green peas every Fall.

Now that I've given you the way to prepare your watercress, let's sit down and enjoy this watercress soup! What do you say?

My special thoughts and prayers to all those who're suffering from any kind of pain. Be it physical, mental, emotional, loneliness, hunger, etc.. I wish you wellness in my prayers.

I love you, Githu. 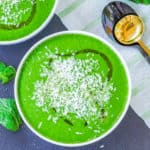